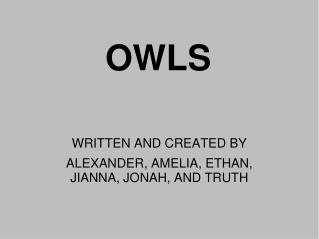 OWLS. WRITTEN AND CREATED BY ALEXANDER, AMELIA, ETHAN, JIANNA, JONAH, AND TRUTH. HABITATS. Owls live in lots of different habitats. Most owls prefer woods and forests for the nesting sites. Snowy owls are found in icy tundra and far north. . Written by Jianna and Truth. HABITATS. Owls - . owls are nocturnal hunting birds with eyes that face forwards. they are closely related to hawks. owls sleep

Owls - . by: brandon . habitat: . owls live in holes they live in barns some live in nests. description. owls have large

Owls - . by hunter harris and brooke plummer june 2013. description. . owls can’t move their eyes. t hat is why they

owls - . facts. owls have to swallow their small bits of food whole and with their lager bits of food they rip it up.

owls - . by maggie. owls are farsighted. owls weight is 28 grams. most owls ofton live in places that are less than 2,56.

Owls - By astrid, audrey and jaede. owls. we will tell you about all kinds of owls. snowy owls ,elf owls and other stuff!

Owls - . silent hunters!. what do you know about owls? think about these vocabulary words and how they are related to

Owls - . owls are nocturnal hunting birds with eyes that face forwards. they are closely related to hawks. owls sleep

Owls - Owls. owls. by : tristan. owls are active at night it is called nocternal. owls have power full tallens (claws)

Owls - . presentation by timothy tran p.s mine is better than ricky’s.