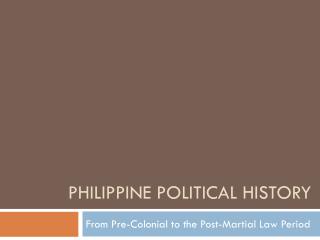 Philippine Political History. From Pre-Colonial to the Post-Martial Law Period. Pre-Colonial . Early Filipinos possessed a well-organized political structure even before the arrival of the Spaniards in the 16 th century. Brief Political History - The name &quot;venezuela&quot; is believed to have originated from americo vespucci who

Modern Japanese Political History - . introduction to the course 10 april 2014. who, when, where. lecturer : earl h.

History of Political Thought - . national socialism, and fascism. “the greatness of every mighty organization

History of Political Parties - . i totally did not want this to happen!. i completely disagree with that. national

Political History of Mexico - . after the spanish conquered mexico, they forced their language ( spanish ) and their

PPT of the History of Philippine Literature - A short presentation for our 21st century literature project :) → nacar,