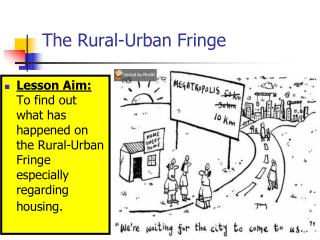 The Rural-Urban Fringe - . what is the rural-urban fringe?. it is the area where the city meets the countryside. recently

The Rural-Urban Fringe &amp; Green Belts - . aim: to find out what has happened on the rural-urban fringe and why

Changes to Swansea’s rural-urban fringe - . key questions:- how has the fringe of swansea changed? what are the impacts

Rural vs. Urban - . frank, lindsey, steven, liz. what is rural; what is urban?. what does each term mean?. the us census

RURAL VS. URBAN - . people moved from small towns and agricultural communities to the city great migration cities had

Rural Urban Migration - . the decision to migrate many different models were presented regarding the process of migration

Mapping the Rural-Urban Interface: A New Frontier in Rural-Urban Research - Presented at the annual conference: national