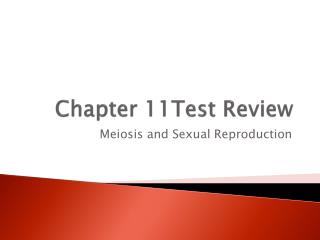 Chapter 11Test Review. Meiosis and Sexual Reproduction. Of the following organisms, which is haploid (one set of chromosomes) and which is diploid (two sets of chromosomes)? Gametophytes Sporophytes Eggs or sperm. Gametophytes are a haploid individual that produces gametes.

A Brief Review of Chapter 1 - . which of the following theoretical approaches in psychology emphasized studying only

CHAPTER 2 TEST REVIEW - . segment bisectors:. the midpoint of a segment is the point on the segment that divides it into Chapter 2 Review! - . good luck . 1. what is an atom? a. single-celled organism b. smallest basic unit of matter

Who am I? Chapter 15 Review - . who am i?. i wrote 95 theses protesting against the catholic churches sale of

Chapter 1 Review Game - . rules and regulations. each team will select a captain for their group. the captain is the only

Review of Chapter 1 - . what is the difference between interpersonal and intrapersonal communication? give me an example

STAR SPANGLED BANNER TEST Get out a piece of paper and number - 1-25. clear off your desk. after the t est we will have

Chapter 1 Review Game - . world studies. bell ringer. we are playing a review game today! you may have out your notebook

Chapter 6-C Test Review - . 1. what are agonist, antagonist, and synergist muscles?. agonist- is the same as a prime

CHAPTER 20 TEST REVIEW - . salute!. what was one result of the loss of native lives to disease?. a. the ruin of several