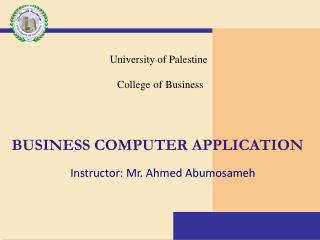 Computer Software Application - . the computer's versatility is built upon its: *hardware: the physical part. *software:

COMPUTER APPLICATION II - . 006 utilize database software. what is a database?. a database is an organized collection of

Why Computer Application ? - I warmly welcome you to this session. first, allow me to say a few words on the purpose and

Business School Application - Crafting a business school application is a very stressful and challenging process, and as

General Computer Application Knowledge - . is there a difference between the genders?. laurie j. patterson, ed.d.

Application in Computer Vision - . final project. nir slakman, oren zur and noam ben-ari. the goal. to create: a game for

Computer Application and Appreciation - . itt 100 paul tate. what is a computer?. a computer is a device or set of

BUSINESS COMPUTER TECHNOLOGY - . 006 utilize database software. what is a database?. a database is an organized