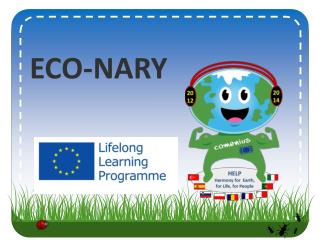 Classroom Conversations Revo lutio nary War - . you will construct a dialogue between colonists living in north america

Water, Water Everywhere (but nary a drop to drink!) - . unit 4: sixth grade. all living things need water to survive. .

eCO - . ecology. what is ecology?. latin “ecos” which means home. in this case the earth is our home. ecology is the

Water, Water, Everywhere and Nary a Drop to Drink - Water availability. organisms can gain or lose waterpartly determined

Eco Drivers not Eco Warriors - . a story about how the head rules the heart lynn moir, energy saving trust. campaign

Eco Thoughts - Note: this document replaces all former mockups and excel bug lists. it is all-inclusive. i will generate

Eco -Reps - . introducing a new position to be filled by one member in every recognized organization at clemson