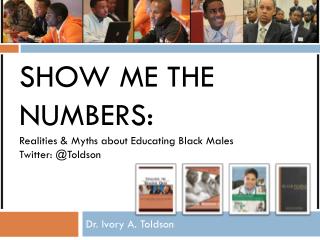 Show Me the Numbers: Realities & Myths about Educating Black Males Twitter: @ Toldson. Dr. Ivory A. Toldson. Stereotype Threat? Reactions to Media Portrayals. “Being a young black male is a blessing that people have tried to make a curse.” Demeterious Doctor - 11th Grade

Myths and Realities about Technology in K-12 Education - . starting assumptions. technology is changing our world

Show me the money! - . atmim january 12, 2012. overview. why financial literacy mathematics not economics check it out

SHOW ME THE MONEY!! - . project financing for offshore wind farms - where will it come from?. eriks atvars, director

Show Me the Numbers! - . how strategic planning can pay off for your health center. what are the numbers?. key indicators

The Myths and Realities of Estate Planning - . presented by: insert agent name/designation(s). the ohio national life

Myths / Realities About Entrepreneurs - . myth 1 (timmons) entrepreneurs are born, not made. - text : not really.

Samuel slide show. All About Me

Single : Myths and Realities - . presentation by: clayton strehlow. so what? i’m still a rockstar i got my rock moves

Myths and Realities of Passion - . i n our marriages and in our relationships with god. first of all, what is passion ?.

Myths and Realities - . over-the-counter medications are safer than prescription medications. reality: all medications,

Myths &amp; Realities - . myth 1 . na is a secret society. reality 1. we are a private organisation. we do our best