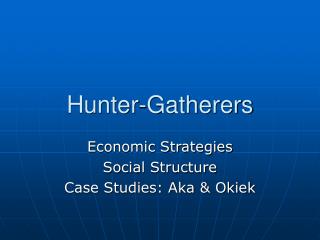 People of the Old Stone Age Hunters &amp; Gatherers - Aim: what are the characteristics of the paleolithic age?.

hunter-gatherers 11. prehistory 2. Artifacts 12. pictographs - You will put the word and picture on one side of

Hunter/Gatherers and Agriculturists - . the paleolithic age and the neolithic revolution. prehistory. what would people

From Hunters and Gatherers to Farmers - . the most important change in human history. the stone age. stone age: named

Hunter - gatherer - . people who survived by searching for wild plants and animals to eat. pre-history. – the time

From Hunters &amp; Gatherers to Farmers - . let’s review…. how did the early humans provide food for themselves?

From Hunters and Gatherers to Farmers - . history alive chapter 3. stone age. gets its name from the tools people made of

Hunter-Gatherers vs. Agriculturalists - . was the discovery of agriculture a good thing? some would say “yes!”

Hunter-Gatherers and Early Farmers - . unit 1 vocabulary. paleolithic. of or relating to the cultural period of the stone

Hunters and Gatherers - . chapter 2, lesson 1. objective. describe the way of life if the hunter-gatherer trace the

Hunters and Gatherers to Farmers - . how did the development of agriculture change life in the neolithic age?.

The First Americans: Prehistory to 1492 - . early peoples. the journey from asia. began around 2800 bce how and why? how?