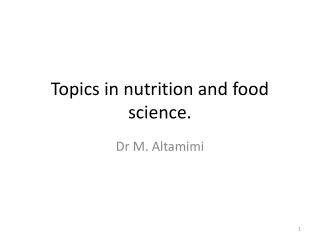 Topics in nutrition and food science. Topics in nutrition and food science.

Proper Food & Nutrition To Fight Lyme Disease - Lyme disease is an infection which occurs due to tick bite. symptoms GCSE Food Technology - . &quot;if more of us valued food and cheer and song above hoarded gold, it would be a merrier

Nutrition - . ansc 2. warm up. food labels: grab a bag of animal food from the lab. please remember where you got this