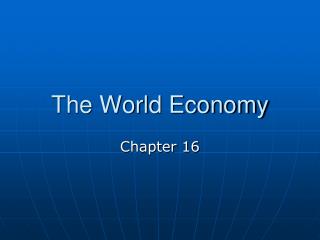 The World Economy. Chapter 16. What advantages allowed Spain and Portugal to expand 1 st ?. Portuguese leaders drawn to excitement of Exploration and desire to hurt the Muslim world Henry the Navigator funded exploration Spanish explorers had been in the Atlantic since the 1400s

Investing in China - Inside the brokerages and stock exchanges across china, the world's second-largest

Engineering for a Changing World - . the future of engineering practice, research, and education. the challenge of

Business, Government, and the World Economy - . introduction. economic quiz. what is the current us unemployment rate?