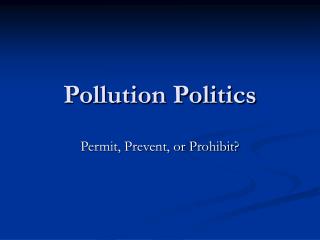 Pollution Politics. Permit, Prevent, or Prohibit?. I. Global Warming Theory (GWT) as a Research Program. Hypothesized in early 20 th century: Relationship between CO2 and temperature understood in 1920s Largely ignored until 1970s. Why? Pollution - . chemicals or other harmful items that end up in the air, on land or in the water and that make the

Pollution - . pollution is a word that everyone should know. no one should be stranger to this important problem that

pollution - . by: brady absher &amp; bradley darmi p ollution and how it affects our would? 2/7/12 pd. 5. description

POLLUTION - . unit 11: influences on the physical environment. environmental influences. “pollution, which comes from a

Pollution - . by: alison gonzalez. definition of pollution. pollution - the introduction of waste into an environment

Pollution - . noadswood science, 2011. pollution. to understand how we can use organisms as indicators of pollution.

POLLUTION - . definition pollution is the effect of undesirable changes in our surroundings that have harmful effects on

Pollution - Human impact on the environment (including succession). changes in complexity. effects of intensive food