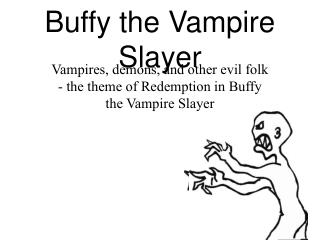 Peter The Dragon Slayer - . a student. start. start here. he came across lidia a beautiful princess. once upon a time in

Vampire Bat - . michael. have you seen a vampire bat? if you have don’t run because your safe. read on to find out

The Vampire Diaries - . recommended by 3e lo kei tung. the vampire diaries. lisa jane smith, an american author one of

Buffy the Vampire Slayer: “Hush” - . background. aired from 1997-2003 written by joss whedon the town of sunnydale is

The Vampire Bat by Alexis - . hey! what’s up? can you guess what i am? i have long wings and sharp incisors. what am i?

The Vampire Diaries: The Awakening - . by l.j. smith published by harpercollins publishers in 1991 this book was written

Buffy, Slayer of the Vampyrs .” - “it’s wonderful to get lost in a story, isn’t it? adventure and heroics and

The Vampire Diaries - . fight. love. change. by: natasha stanicki. introduction. the tv show that i am choosing to

Existential Therapy Probing the nature of being human - . as illustrated by buffy the vampire slayer. rollo may. born