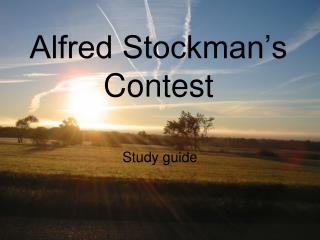 Alfred Stockman’s Contest. Study guide. Dairy Cattle Breeds. Holstein. The Holstein originated in Holland. They are very efficient animals that make the most of the food they eat. They are very large animals, and can be either red and white, or black and white. Ayrshire. Eurovision: the contenders - The finalists for saturday's eurovision song

BCC ESL Program US Culture Contest Part 2 - . in what month is the president inaugurated ? january. which state was sold

Alfred and Marlene - . a celebration of 50 years of love. how it all started. isn’t she lovely. young and in love. then