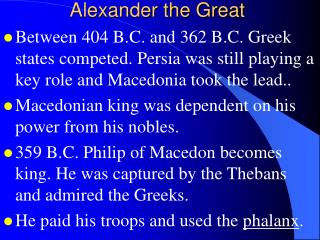 Alexander the Great. Between 404 B.C. and 362 B.C. Greek states competed. Persia was still playing a key role and Macedonia took the lead.. Macedonian king was dependent on his power from his nobles. 359 B.C. Philip of Macedon becomes king. He was captured by the Thebans and admired the Greeks.

THE INTER-TESTAMENTAL PERIOD - . 400 years of history in ten minutes. life under the greeks. alexander the great dies in

Before Reading_ MAIN - . a prominent scientist, a well-known soviet philosopher and psychologist. about the author. one

Alexander the Great - . image 1. aim/goal: was alexander the great a hero or a villain? do now: look at the images and

Alexander the Great - . fill the void and then some. macedonia. a mountainous kingdom north of greece macedonians had