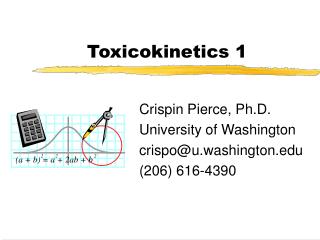 INTRODUCTION TO PHARMACOKINETICS - . pharmacokinetics. it is the science of the kinetics of drug absorption, distribution

Toxicokinetics &amp; Toxicodynamics - . toxicokinetics (determines the no. molecules that can reach the receptors)

Lead and Arsenic Toxicity - . lead poisoning. physical properties lead ( pb ) has been used by humans for at least 7000