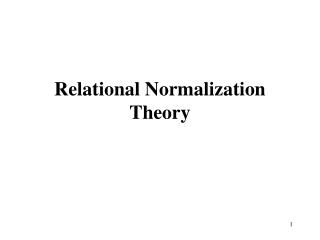 Relational Normalization Theory. Limitations of E-R Designs. Provides a set of guidelines, does not result in a unique database schema Does not provide a way of evaluating alternative schemas

Chapter 4 Functional Dependency and Normalization - . 4.1. functional dependency. when we design a database for an

Relational Algebra and Calculus: Introduction to SQL - . university of california, berkeley school of information is 257:

Theory of Normalization - . there are many types of normalized forms existing in a data base environment. first normal