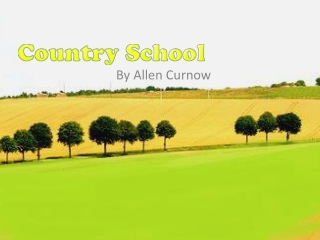 By Allen Curnow. You know the school; you call it old – Scrub-worn floors and paint all peeled On barge-board, weatherboard and gibbet belfry Pinus betrays, with rank tufts topping The roof-ridge, scattering bravely Nor’west gale as a reef its waves While the small girls squeal at skipping 2013 South High School Cross Country End of Season Banquet - . please join us to celebrate the end of a wonderful season

My Country Project - . by marie hagemaster. what is the country?. my country that i studied is mexico. mexico is part of

MUN@ASU High School Conference - . november 5-6, 2010. contact information. if you need help or have any questions,

Middle School 101 - . everything you w anted to know a bout m iddle school…but were afraid to ask!. we will cover….

Does a RESEED Volunteer effect the Middle School Science Student? - . is t here a prolonged effect on student knowledge

THE SCHOOL TRIP of HIGH SCHOOL STUDENTS - . from japan to taiwan and from taiwan to japan. numbers of japanese traveling

Riverview High School - . us army jrotc . the cadet creed. i am an army junior rotc cadet. i will always conduct myself

Handling Potential Transfer Credit from a &quot;Non-Recognized&quot; School in Another Country - . dale gough,