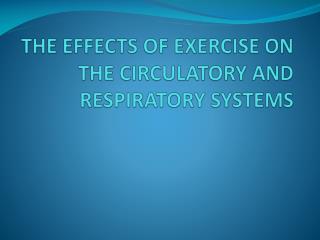 THE EFFECTS OF EXERCISE ON THE CIRCULATORY AND RESPIRATORY SYSTEMS

THE EFFECTS OF EXERCISE ON THE CIRCULATORY AND RESPIRATORY SYSTEMS

The Respiratory System and The Circulatory System - . prepared by: chris reyes, robert rock and keturah reed. the

Effects of Exercise on the Muscles - . jessica lewis anatomy and physiology february 23, 2012. bibliography.

Circulatory and Respiratory Systems - . circulatory system (section 1) . connects the muscles and organs of the body

Changes to the Respiratory System - . the effects of exercise, smoking and asthma. effect of smoking. point. example.

The Circulatory and Respiratory Systems - . learning goals. by the end of this unit you should be able to: identify and

The adaption of the cardiovascular system to long term exercise - . anatomy and physiology unit 1&amp; 2.