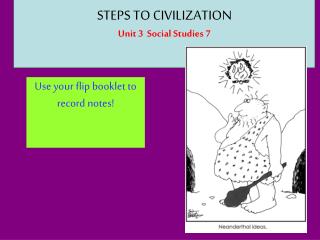 STEPS TO CIVILIZATION Unit 3 Social Studies 7. Use your flip booklet to record notes!. Look Around You!. How did the world you see come to be the way it is?. Why are you watching this PowerPoint instead of waiting outside a gopher’s hole, with a spiked club in your hands?.

Next steps - . read the operational programme and the guidance notes check the nwe website on a regular basis for

Stages of history , in the Region of Murcia - . lorena mateo 2ºb. prehistory.

STEPS TO CIVILIZATION Unit 3 Social Studies 7 - . follow along using your booklet to fill in your answers. look around

Ancient Chinese Inventions - . by akime nicholas. the chinese were the first people in the world to make silk, and for

Test REVIEW - . unit 10 thermochemistry. 1. how much heat energy is needed to raise the temperature of a 55 g sample of Oration - Definition:. parts of speech:. noun. oration. a speech, especially one in public for a special occasion.