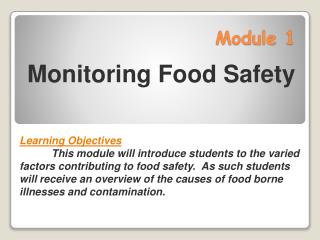 Monitoring Food Safety. Module 1. Learning Objectives This module will introduce students to the varied factors contributing to food safety. As such students will receive an overview of the causes of food borne illnesses and contamination. MODULE 1 - . introduction. our acts or responses to a situation practically reflect our feelings, thinking and judgment

MODULE 1 - . in classical mechanics we define a state as “the specification of the position and velocity of all the

Module 1 - Pediatric assessment. module 1. communicating with children and families. chapter 32. one of the first steps

Module 1 - . engaging hard-to-reach populations living with hiv/aids into care. the hiv/aids epidemic in the united

MODULE 1 - . introduction to backward design and learner-centered teaching (lct). our goal. how to design

Module 1 - . the personal experience of restraint and seclusion. learning objectives upon completion of this module the

MODULE 1 - As marketing and accounting and finance. module 1. company accounts. sources of finance. the difference