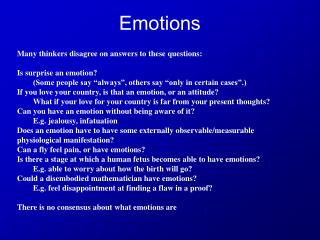 Emotions. Many thinkers disagree on answers to these questions: Is surprise an emotion? (Some people say “always”, others say “only in certain cases”.) If you love your country, is that an emotion, or an attitude? What if your love for your country is far from your present thoughts?

Emotions - . http://www.youtube.com/watch?v=_yqpbzq6gzs. basic emotions. emotions: any of the particular feelings that

Emotions - . emotions. feelings created in response to thoughts, remarks , or events. you think of your grandpa who

Emotions - . feeling , such as fear, joy, or surprise, that underlies behavior essential questions: what causes us to

EMOTIONS - . lesson 1 for the 1 st of january, 2011. what negative emotions can you identify in the characters in this

EMOTIONS - . basic vocabulary. experience feelings, emotions mind the verb resent which means ‘not to accept , be

Emotions - . what are emotions?. emotions are the strong, immediate reactions that you feel in response to an experience.

Emotions - . and words for them. advantages of irrationality. you have an expensive possession, but it would cost you

Emotions - Before the bell: grab the 3 worksheets from the front table states of mind emotions naming emotions grab your

Emotions - Before the bell: grab the 3 worksheets from the front table states of mind emotions naming emotions. emotions.

Emotions - . purpose and objectives. the purpose of this lesson is to provide students with an introduction to some of