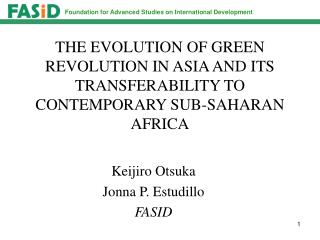 THE EVOLUTION OF GREEN REVOLUTION IN ASIA AND ITS TRANSFERABILITY TO CONTEMPORARY SUB-SAHARAN AFRICA. Keijiro Otsuka Jonna P. Estudillo FASID. Essence of the Green Revolution in Asia.

THE MUSIC OF SUB-SAHARAN AFRICA - . sub-saharan africa is extremely diverse. we will explore the relationship between

Sub-Saharan Africa - . espn and mapping on page 39 of your isn, complete an espn chart for this region. use your atlas

Living in Sub-Saharan Africa - . agriculture. farming is the main economic activity in sub-saharan africa. most people in

EVOLUTION OR REVOLUTION - . a sustainable renovation of a 1950's weatherboard home. evolution or revolution. sean

Sub-Saharan Africa: History and Government - . first civilizations . around 2,000 bc thousands of saharan africans were

The Green Revolution - . the 3 rd agricultural revolution. history of the green revolution. beginning. rockefeller and

Geography - . sswg4 the student will describe the interaction of physical and human systems that have shaped contemporary

The consequences of the development gap; sub Saharan Africa - . by the end of today’s lesson all of you will: know

The green Revolution - . objectives to understand what the green revolution is to evaluate the successes of the green