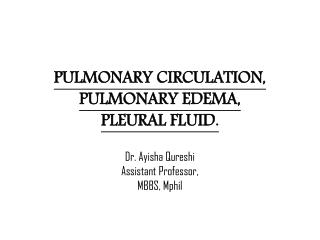 PULMONARY CIRCULATION, PULMONARY EDEMA, PLEURAL FLUID. Dr. Ayisha Qureshi Assistant Professor, MBBS, Mphil. OBJECTIVES. By the end of the lecture, you should be able to: Give the physiologic anatomy of the Pulmonary Circulatory System. Name the 2 types of blood supplies of the lung.