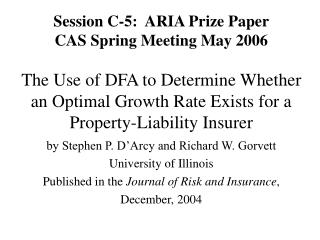 Session C-5: ARIA Prize Paper CAS Spring Meeting May 2006 The Use of DFA to Determine Whether an Optimal Growth Rate Exists for a Property-Liability Insurer. by Stephen P. D’Arcy and Richard W. Gorvett University of Illinois Published in the Journal of Risk and Insurance , December, 2004.

RESIDENCE AND TAX LIABILITY - . residence of assessees three categories of assessees are: ordinarily resident not