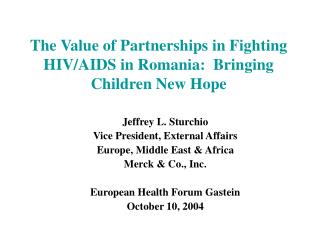 The Value of Partnerships in Fighting HIV/AIDS in Romania: Bringing Children New Hope

The Value of Partnerships in Fighting HIV/AIDS in Romania: Bringing Children New Hope

Bringing Leaders Together to Inspire change - . presents. a poverty symposium dedicated to the proposition that our

Bringing Light and Hope to Afghanistan - . the private sector as a catalyst for change potential roles of businesses in

A generation of children free from AIDS is not impossible - . children and aids fourth stocktaking report, 2009.

Children and AIDS through different lenses - . dr sharlene swartz. 15 july 2009. outline. where do you stand? important

Fanon’s Land - . by remi, megan, and makayla mod 12-13. title. we think it will be about people fighting against aids

HIV - . a journey of hope through the p erfect storm presented at the sixth tri-divisional hiv/aids meeting september