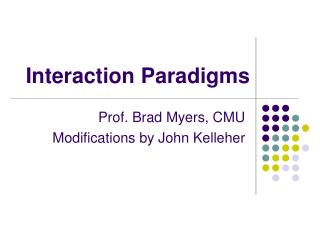 Interaction Paradigms. Prof. Brad Myers, CMU Modifications by John Kelleher. User Interface Styles . A method for getting information from the user or interfacing with a user. Usually, interfaces provide more than one style: Command language for experts with menus for novices

Programming Paradigms and languages - . criteria covered in this presentation. p1 : describe the application and limits

Research Paradigms - . research seminar (1/2 of book complete with this pp). research paradigm. defined as the

New trends and paradigms in HENP: where do we go from here to “there”? - . jérôme lauret rhic/star software

Paradigms &amp; Principles - . what is a paradigm?. the way you see something, your point of view. they are like

HCI in the software process Chapter 6 - . agenda. software engineering and the design process for interactive systems

chapter 4 - . paradigms. why study paradigms. concerns how can an interactive system be developed to ensure its