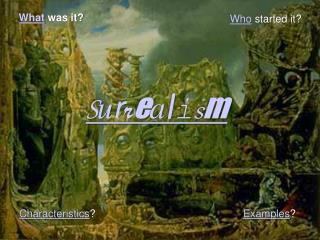 What was it?. Who started it?. S u r r e a l i s m. Characteristics ?. Examples ?. What Was Surrealism?. A post-WWI art movement that emphasized dreams and the unconscious A response to the unimaginable horror that man was capable of Surrealism - . “ surrealism is an artistic movement and an aesthetic philosophy that aims for the liberation of the

Surrealism - . rene magritte, the son of man, 1964. surrealism began as a literary movement after world war i. surrealist