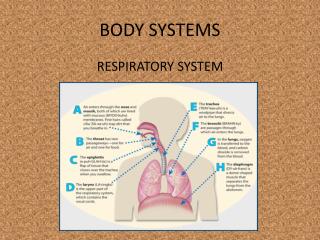 BODY SYSTEMS. RESPIRATORY SYSTEM. BREATHING. Breathing is a function of your respiratory system . respiratory system A system that consists of organs that supply the body with constant oxygen and rid the body of carbon dioxide A person can only live a few minutes without oxygen.

Human Body Systems You Can’t H ave O ne W ithout T he Other - . body systems work together. if you damage one system,

The Lymphatic System - . chapter 21. introduction. the lymphatic system supports the function of the cardiovascular and