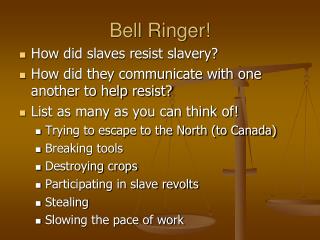 Bell Ringer!. How did slaves resist slavery? How did they communicate with one another to help resist? List as many as you can think of! Trying to escape to the North (to Canada) Breaking tools Destroying crops Participating in slave revolts Stealing Slowing the pace of work. Bell Ringer - . find the bell ringer on second page with the outline of the car. fill in some roadblocks you might

Bell Ringer - . read page 231 and answer #1 and #2 on your bell ringer sheet. bell ringer answer. a popular athlete will

Bell Ringer Tuesday, February 21 st - . no bell ringer stamp if you don’t have an id on and/or you are talking! takeout

DBQ 一 Bell Ringer - . any day except the first day: get out your “dbq guide” paper. pick up your dbq packet from

Bell Ringer 1/25/12 - . glue the page of world leaders into the next available page in your bell ringer section. then

BELL RINGER - . what is something that your culture does that is different from other cultures?. happy thursday!! –

Bell Ringer - . directions. bell ringer. write down, as best as you can remember, ms. barker’s policy on late work.