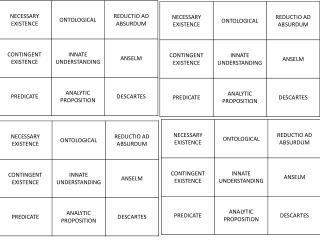 Anselm’s Understanding of God – the difference between contingent and necessary existence. His argument centres on a definition of God as ‘that than which nothing greater can be thought’ - God understood to be the highest sum of all perfections, where nothing could surpass him in any way .

Understanding the difference between: - . biography autobiography group biography. who are you ?. clue : his books in the

The Existence of God - . the existence of god. first things some arguments for god’s existence some implications if god

Proofs for existence of the spiritual world - . -. soul’s origin. once we understand the difference between body and

Argument from Design - . review: leibniz and psr. something “created” is something contingent on its creator—i.e.

The Ontological Argument - . the existence of god is logically the only possible explanation. anselm (1033 –1109).

Chapter 14 - . anselm, abelard, and bernard. questions to be addressed in this chapter. what does anselm’s “faith

Anselm of Canterbury 1033-1109 - . born to a noble family in italy as a young man, joins the benedictine order in

THE DOCTRINE OF GOD - . theology proper. the doctrine of god. the existence of god non-christian concepts of god