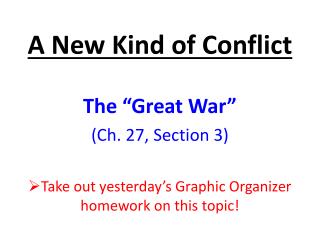 A New Kind of Conflict A New Kind of Conflict. The “Great War” (Ch. 27, Section 3) Take out yesterday’s Graphic Organizer homework on this topic!.

A New Kind of Conflict

Rikki Tikki Tavi by Ruyard Kipling - . the plot and its elements . ms. lopez february 21st, 2012. overview. the plots and

Critical Analysis of The Outsiders - . created by: sandra boyd. conflict. the central problem in a plot. man against man

What is Plot? - . plot is the literary element that describes the structure of a story. it shows arrangement of events

Team Management and Conflict - . teams defined. a group of two or more people interact regularly and coordinate their

Emotions in Conflict - . chapter six. emotions. states of feelings we experience emotions when our feelings and

A History of War and the Law of Armed Conflict - . preliminary statements of purpose : . law is not just applied to the

Events and Conflicts The Call of the Wild By Jack London - . lauren m. jordan m. alyssa b. chapter 1. manuel had a