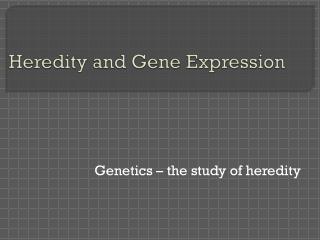 Heredity and Gene Expression. Genetics – the study of heredity. Lesson Objectives. At the end of this topic you should be able to Discuss the variation and diversity of organisms Define the term species Define the term heredity Give an example of heredity

DNA, GENE AND CHROMOSOME - . by khalid el jendi molecular genetics specalist. what is a gene?. a characteristic passed Genetics - . chapter 8. origins of genetics. heredity the passing of characters from parents to offspring character

Genetics &amp; Heredity - . mendel and his peas. gregor mendel. heredity – the passing of traits from parents to

Heredity - . unit 3 chapter 29a. heredity. who we are is guided by the gene-bearing chromosomes we receive from our

Chapter 14: Mendel and the Gene Idea - . heredity. heredity= passing of traits from parent to offspring reproductive

Genetics and Heredity - . lab exercise 40 bi 233. genome. all of the genes in all of the chromosomes together are called