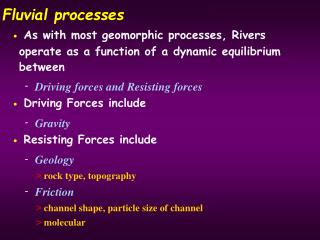 Process Geomorphology - . 9/20/2011. pattern to process, process to pattern. moral of the day. “process” occurs when

RIVERS AS AGENTS OF EROSION, TRANSPORTATION AND DEPOSITION You should be able to: - Describe the changes in river

Natural Processes Revision - . achievement standard 91426 . how to study for natural. read through your mini muriwai book

GRAVITY I: WATER ON HILL SLOPES.

Coastal Processes - . lesson 1. lesson aims: what is the coast? what is meant by a coastal system? what are the inputs,