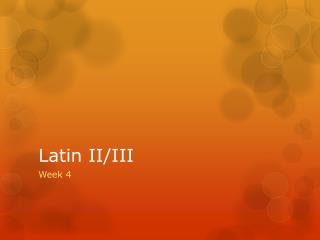 Latin II/III. Week 4 . Relative Pronouns. used to relate to/ refer to some preceding word (antecedent) the relative pronoun must agree with the antecedent in gender and number , but it takes the case for the clause it is used in. The Latin West - . the latin west. in western europe, latin christianity converts the peoples of many tribes (goths early

Music of Latin America - . “ ¡viva méxico! ”. in this unit, we will…. explore the geography of areas with latin