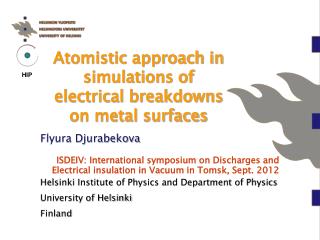 Atomistic approach in simulations of electrical breakdowns on metal surfaces Atomistic approach in simulations of electrical breakdowns on metal surfaces

Thesis Breakdowns - . time to start thinking about your research ideas! . warning! . i will give you associative ideas

Ionic Compounds and Naming - . chapter 4.10,4.11 and 5. when we begin combining elements we make compounds. two types

Metal tapping with vehicles as a part of lean production approach - . presented at aluminium middle east 2013. the market

SIMULATIONS - . simulations are used by engineers, programmers, and other scientists to produce the probable results of

THERMAL OXIDATION - Chapter 6 - . basic concepts. • sio 2 and the si/sio 2 interface are the principal reasons for