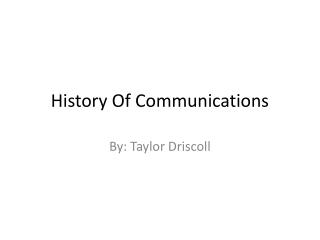 A History of Radio Technology - . demystifying telecommunications by: al klase. what do these have in common?.

The Impact of Technology on Communication - . william decotiis february 17, 2012. a brief history of communication. a

A Brief History of Communication - . david tse. communication systems. what goes into the engineering of these systems?.

History And Development of International Communication - . introduction:. the nexus of economic ,military, and political

TECHNOLOGY and COMMUNICATION - . 4000 years in 14 minutes!! raj badarinath. how people communicate. one to one. one to

History Of Communication - . discovery of fire 500 000 bc. fire is the combustion or burning, in which substances combine

Communication &amp; Telephone Handling - . communication. by the end of this session, you will be able to: