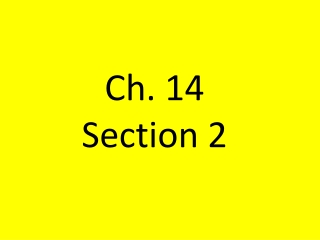 Ch. 14 Section 2. During fiscal year 2000, the federal gov. took in more that $1.8 trillion in taxes. If you divide up this federal tax revenue among all the people in the United States, it comes to about $6,500 per person. The federal government has 6 major sources of tax revenue.

Job Seeker’s Workbook - . table of contents. section 1: getting started section 2: your job is out there section 3: