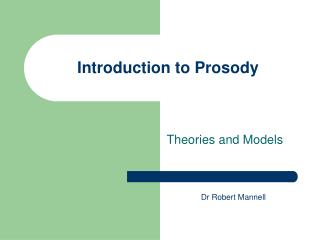 Prosody - . understanding the meter of a poem to better understand and appreciate content. meter. a poem is metrical when

Rhythm and Meter - . rhythm . rhythm refers to the regular recurrence of the accent or stress in poem or song. consider.

What tools are needed to account for prosody in its relation with discourse ? - . a. di cristo, c. portes, c. auran, r.

Terms for Discussing Prosody - . what is prosody?. the term “prosody” refers to discussions of the kinds of stressed