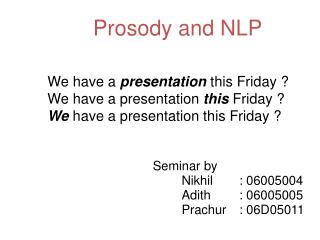 Prosody - . understanding the meter of a poem to better understand and appreciate content. meter. a poem is metrical when

Prosody and Verb Placement - 1. the processing of surface structure ambiguities in german: influence of explicit prosody

Prosody and Fluent Reading - . heather allison jessica shortridge. are you tired of your child reading poorly?. then try