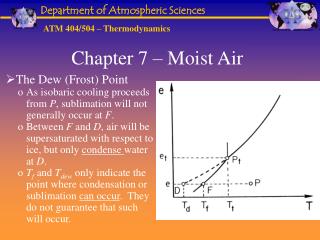 Chapter 7 – Moist Air. The Dew (Frost) Point As isobaric cooling proceeds from P , sublimation will not generally occur at F . Between F and D , air will be supersaturated with respect to ice, but only condense water at D .