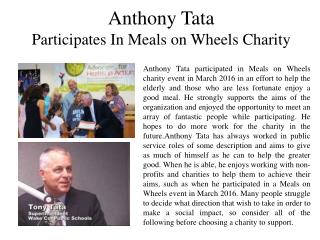 Anthony Tata received his Bachelor of Science at the United States Military Academy in 1989. His thirst for knowledge didn’t stop there though and he went on to study at the Catholic University of America, receiving his Master of Arts in International Relations in 1991. He also attained a masters of art and science from the School of Advanced Military Studies and served a National Security Fellow at Harvard University’s JFK School of Government. In addition to continuing his studies, he has enjoyed a long career in the military and political fields, in addition to becoming a bestselling novelist. Meals on Wheels - . 1973-. whom do we serve. people at home unable to cook within the city diet order any age or income.

Thrills on wheels! - . the adventure of a lifetime. things to do:. sensational tours on rugged terrains rainforest and

Librarians on Wheels - . using robotic telepresence to address students in the classroom and beyond. emy n. decker