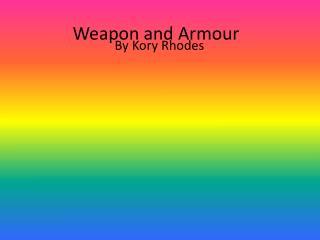 Weapon and A rmour . By Kory Rhodes. The Broadsword.

Medieval Weapons & Armours - Medieval weapons and armours are being major used the wars of the medieval period. there

The Full Armor of God - Part 3 Ephesians 6:14-17 - . belt of truth breastplate of righteousness feet shod with the gospel

gladiators - . and weapons. contents. 1 weapons they used the sword 2 the spear 3 the dagger 4 the bow and arrow 5 the

Apply Question!! - Leilani . apply question!!. draw the weapons and armour vikings used in battle next to each drawing

Medieval Weapons - . by: arjiana webster. the claymore. the claymore or “great sword” attested in 1772 (as cly

TUDOR WEAPONARY - . by morgan and charlie. the longbow. the longbow could peirce armour at ranges of more than 250 yards.

Weapons and Armor of Ancient Rome - . jonathan harrison and naveed stegamat. armour. galea (helmet). made of bronze with