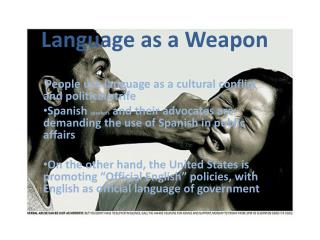 Language as a Weapon. People use language as a cultural conflict and political strife Spanish speakers and their advocates are demanding the use of Spanish in public affairs Malicious Code as Weapon - . reading. required: government-built malware and cyber weapons will run out of control,

Malicious Code as Weapon - . reading. required: government-built malware and cyber weapons will run out of control,

Deploying Hoshin Kanri as a Competitive Weapon - This presentation evaluates the hoshin kanri concept, what it is, how it

Art as a Language - If graffiti changed anything, it would be illegal. art as a language. communication through street

Language as a Practice - . practices are: actions and activities shared by many people repeated and used many times.

Language as a Barrier - . language is used to promote national identity how translations impede intercultural

The US Grain Arsenal: Food as a Weapon - . roger burbach and patricia flynn. food as a weapon?. “ food is a tool. it is

The U.S. Grain Arsenal: Food as a Weapon - . mackenzie weatherly . “food is a tool. it is a weapon in the u.s.

English as a Second Language - . who are our english language learners?. united states facts. the u.s. has the 5th