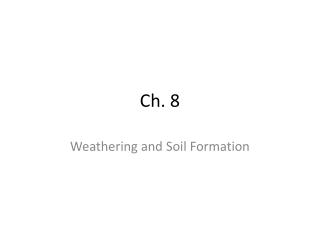 Ch. 8. Weathering and Soil Formation. Section 2: How Soil Forms. What is Soil? Soil is the loose, weathered material on Earth’s surface in which plants can grow Bedrock is the solid layer of rock beneath the soil Soil Composition Ch.8 - . plants. section 5: plant responses and growth. tropisms a plant’s growth response toward or away from a

Ch. 8 - . “simple genetics practice problems”. 1. for each genotype, indicate whether it is heterozygous (he) or

CH 8 - . a fault is ____. a.a place on earth where earthquakes cannot occur b.a fracture in the earth where movement has

Ch\8 - The concept of method. ch8. method in language teaching is a multiply ambiguous term. any principled choice of

Ch 8 - Joints. ch 8. joints. articulations: the site where 2 or more bones meet. joints are the weakest part of the

Ch. 8 - . “genetic crosses that involve two traits”. #1. what are the phenotypes (descriptions) of rabbits that have

Ch. 8 - . plants. section 1: the plant kingdom. what is a plant nearly all plants are autotrophs, organisms that produce

Ch. 8 - . weathering and soil formation. section 3: soil conservation. the value of soil sod is the think mass of tough

Ch. 8 - . china…. lesson 1: an emerging empire ( most of the focus ). thinking focus what were some of the obstacles to