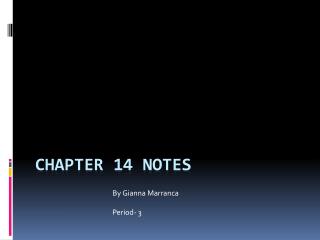 Chapter 14 notes. By Gianna Marranca Period- 3. Section 1-populations and how they grow. Population -a group of organisms of a single species that live in a given area. Ex/ whitetail deer live in forests. Species- a group of organisms that reproduce fertile offspring.

Chapter 1 Notes - . government . the authority which carries on the work of looking after public interest and consists of Investing in Mutual Funds or Real Estate Chapter 14 Notes - . mutual funds this is the most popular investment

Chemistry Notes Chapter 2 - . describing matter properties used to describe matter can be classified as extensive or

Chapter #14 - . magnets and magnetic fields. chapter 14.1 notes. magnetic pole an area of a magnet where the magnetic