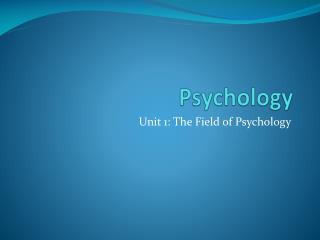 Psychology. Unit 1: The Field of Psychology. What is Psychology? How Can it be Applied to Everyday Life?. Behavior. meaning any activity we perform consciously or unconsciously ex. Breathing, blinking, lying, learning, attitudes, thoughts, physical changes and emotional changes