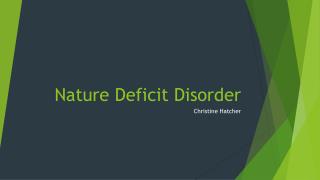 Childhood Obesity - . nutrition 120. definition. canada, like many nations, is in the midst of an epidemic of overweight

Annie Dillard, as quoted by Richard Louv in Last Child in the Woods - [we need to] “…explore the neighborhood, view

Evidence Based Assessment and Treatment of Attention Deficit Hyperactivity Disorder May 14, 2010 - Christopher k.