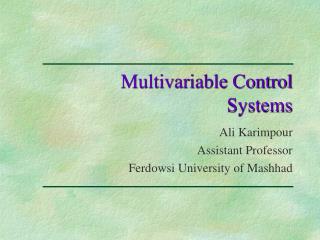 SOME THEOREM ON EULERIAN INTEGRALS OF MULTIVARIABLE H-FUNCTION AND THEIR APPLICATIONS By - Md. azhar hussain department

7.3 Multivariable Linear Systems - . we will be looking at equations with 3 variables like equations generate a plane in

The multivariable regression model - . airline sales is obviously a function of fares—but other factors come into play

Recall: Representation Changes: - Gaussian elimination solves a system of linear equations by first transforming it to