Get ready for the quiz - PowerPoint PPT Presentation 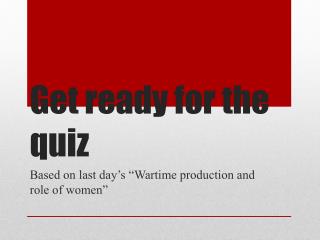 Get ready for the quiz

Get ready for the quiz. Based on last day’s “Wartime production and role of women”. 1. Churchill referred to the British war as “total war” whereas King referred to Canada as being this? 2. Who was Canada’s Minister of Munitions and Supplies? 3.What does CMAC stand for?

Get ready for the quiz

Get Ready for a Quiz - . clear your desk of everything take out a pen no talking. quiz corrections. write cb at the top

Orpheus Quiz - . the great musician created by, ms. jennifer duke. directions : take out a blank piece of paper and pen

A Short Math Quiz - . this short quiz has been written to model the use of action buttons in powerpoint. when you are

Quiz 1 - . question # 1. most likely diagnosis of the lesion seen in this radiograph is? rarefying osteitis complex

Are you Ready for the Quiz Today - . yes no with the little help from a friend. upcoming in class. quiz 3 thursday –

Get Ready to Read - . how can our determination affect our ability to succeed? how did marian’s conviction and

QUIZ - . according to the scientific community how old is the earth? what type of rock are the oldest know rocks? what

QUIZ - . equality is about everyone having the same chances to fulfil their potential diversity is about understanding

Tornado Safety Quiz - . be ready. question 1. what is a “tornado watch” ?. a. c onditions favorable for a tornado to