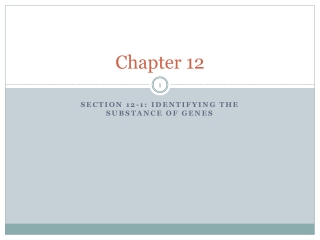 Chapter 12. Section 12-1: Identifying The Substance of Genes. How do genes work?. First step was to identify what molecule or molecules go into making a gene. Identifying the Molecule of Heredity. S cientists had to discover the chemical nature of the gene

Lecture 3 what Genes are and What they do - . part ii three chapters. how the molecule of heredity carries, replicates,

Chapter 12 - . identifying the substance of genes. chapter mystery. page 337 uv light why is uv light so dangerous? how

1. The genes for mahogany eyes and ebony body are recessive and 25 map units apart on an - Autosome in drosophila. a

What do genes do? - George beadle and edward tatum. “one ought to be able to discover what genes do by making them

DNA, Genes and Genetics - . what is dna?. - dna stands for d eoxyribo n ucleic a cid -dna is the hereditary material

Lesson Overview - . 12.1 identifying the substance of genes. think about it. how do genes work? to answer that question,

Linked Genes and Human Inheritance - . humans have approximately 20,000 – 30,000 genes that code for traits. however,

Lesson Overview - . 12.1 identifying the substance of genes. think about it. how do genes work? to answer that

Genes and Protein Synthesis - . chapter 7. one gene-one polypeptide hypothesis. dna contains all of our hereditary

What Do Genes Look Like? - . pgs 80-87. traits are determined by genes. genes can be passed down from generation to